What should we do to use SIM free smartphone in Malaysia?

I finally got SIM free iphone last year.
So I was thinking about trying to use prepaid SIM when I go abroad.

・Mobile circumstances of Malaysia（2） – How to use the LTE service in Malaysia?

Because the purchase of the prepaid SIM card is easy in Malaysia and it is cheaper than global roaming and is controlled, I recommend using LTE service with a prepaid SIM card.

The store of the mobile communication company is substantial in the Kuala Lumpur International Airport that can be called the Malaysian doorway.

・The Kuala Lumpur Airport was heaven of prepaid SIM

Nice one being easy to buy prepaid SIM for KLIA/KLIA2, a tourist competing with Singapore as a Southeastern Asian hub airport.
For example, I arrive at KLAI2 of Kuala Lumpur in “AirAsia X” of the AirAsia group from Japan, and the shops of the carrier line up in front if I receive baggage after entry and come out to the lobby.
Besides, business hours are 24 hours. It is impossible and is convenient.

The hurdle of the SIM card purchase seems to be considerably low as far as I read these.

I just wrote down Malaysian wifi carrier names.
And I thought I will buy at the store which I found first.

TuneTalk which cooperates with AirAsia

I arrived at the Penang Airport this time in AirAsia.
I got off an airplane and found a shop counter of TuneTalk on the way to bring my baggage.
TuneTalk is MVNO of the mobile cell com (Celcom) communications network of company major (mobile virtual network operator).

I knew it later, but the purchase of the SIM card seems to be possible together when I reserve the flight of AirAsia. In that case, do not forget it because it is necessary to show the details of the reservation completion in a shop.

Because there was a shop in the place so easy to find because cooperate with AirAsia.

I did not purchase it at the time of a flight reservation.
But I thought I really need SIM card, I must buy SIM at first when I arrived at the destination.

Even dollars payment is OK. The sales lady of the counter sets it quickly

Because the line of Celcom of carrier major is used, you can enjoy a call and the Internet widely in Malaysia.
I confirmed it whether I is usable this time in both because I was going to go to Kuala Lumpur from Penang.

Because I was still before immigration, so I did not have Malaysian ringgit without changing money.

“It’s OK” when I heard whether the dollar on hand was usable. Awesome. She calculated a rate properly and deducted a rate and returned me ringgit for the change.
By the way, it seems to be open for 24 hours.

I have used up the first data immediately

TuneTalk gives nothing including the manual. Though I asked the person in charge at the time of the purchase, I was not able to understand a little careful talk. (my fault lacking command of English)

I thought that I would understand it if I checked it later, but I did not know even that there was quantity of first data only as for 100MB well.
This message came immediately in SMS when I downloaded sound data of Podcast casually at night of the first day.

Oh,No! Was there not anymore it?

It is called “top up” that I charge for prepaid card.

I seem to be able to charge on a site of TuneTalk when I check it in a internet. 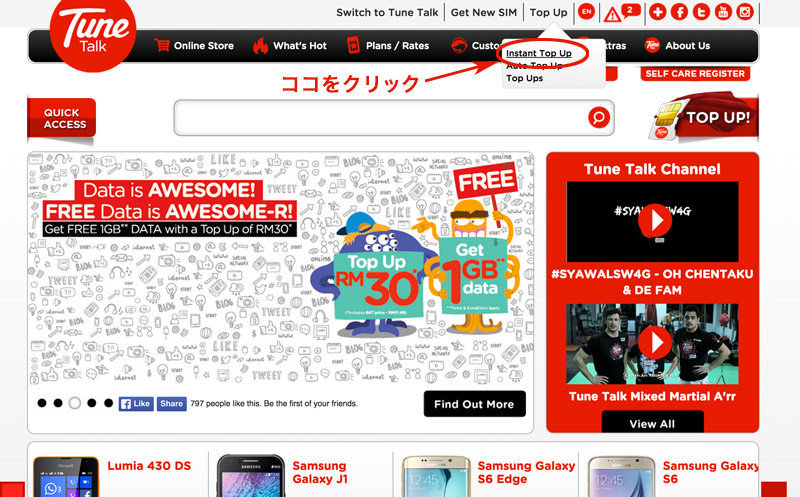 “Top Up” is found at the top upper part menu of the website, when I look at the top page. At first click here. 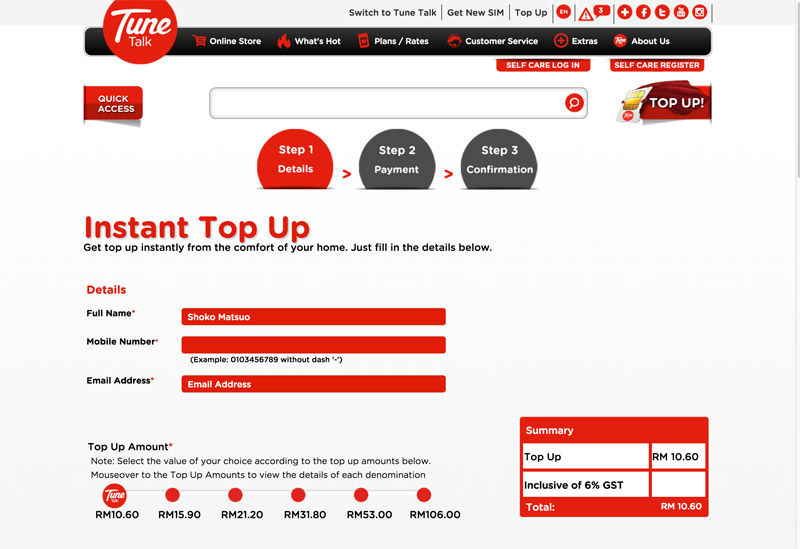 The input column of name, a phone number, and the e-mail address came out.

GST is an article and service tax in Malaysia.

What amout of MB is usable in 10.6RM ?
It is not written anywhere.

I purchased it in this first of all.

I could pay by using PayPal.

When payment is complete, news reaches the e-mail address. 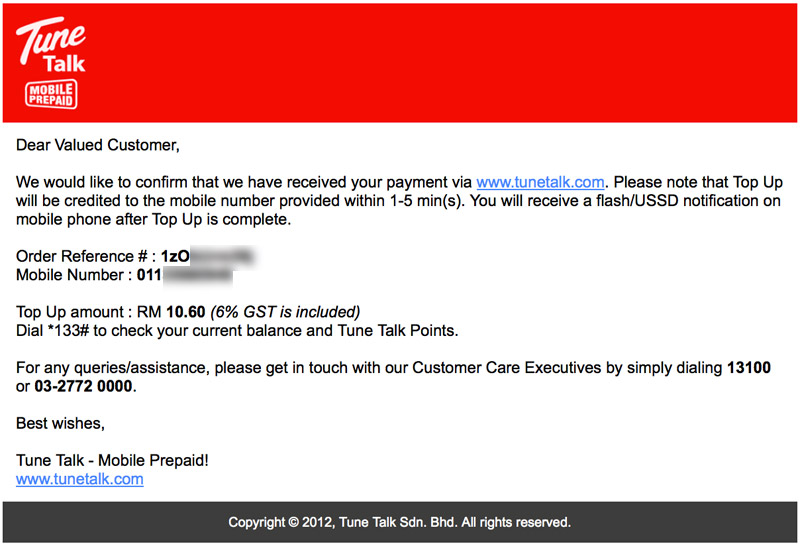 We would like to confirm that we have received your payment via www.tunetalk.com. Please note that Top Up will be credited to the mobile number provided within 1-5 min(s). You will receive a flash/USSD notification on mobile phone after Top Up is complete.

How was that?
Is it easy to charge(=topup)?

After top up, I did not know how much data were usable.
Please tell me.

Because after all I had used it up, the next three days later, I did the topup during a ８-day stay in Malaysia twice.

When I leave the customs and arrive at the arrival lobby, I buy a SIM ...

Hinduism temple right by the ChinaTown There was a temple of ...

Thailand and Burmese chaitya are built at the gurney drive of Penang f...

It is really important for charging a battery of your smartphone when ...