My friend of the Japanese sweet enthusiast sometimes held a small group. “Let’s drink sake( Japanese alcohol ) while eating a Japanese sweet in the Sunday afternoon”

I can’t drink alcohol but love sweets. So I participated this meeting twice and knew “Anko ball” at the group meeting.
I thought that I would buy it by all means if I found it because I have never eaten that before.

In the middle of transferring from Namboku Line ( North-south Line ) to Tozai Line ( East-west Line ) in Iidabashi, I discovered that there was the shop which sold bean jam balls!

It founds the name of the shop in “Funawa” in 1902 in Asakusa and is a long-established store Japanese sweet shop following more than 100 years.
It is said that this shop spread “mitsu-mame” from the Meiji era through the Taisho era.

Mitsumame is a Japanese dessert. It is made of small cubes of agar jelly, a white translucent jelly made from red algae or seaweed. The agar is dissolved with water (or fruit juice such as apple juice) to make the jelly. It is served in a bowl with boiled azuki beans, often gyūhi, Shiratama dango and a variety of fruits such as peach slices, mikan, pieces ofpineapples, and cherries. The mitsumame usually comes with a small pot of sweet black syrup, or kuromitsu which one pours onto the jelly before eating. Mitsumame is usually eaten with a spoon and fork.

It was around 800 yen with six kinds of bean jam balls and potato yokan two.
You should finish eating early if you bought them because it is said that this product does not keep for long.

Look at these beautiful colors! 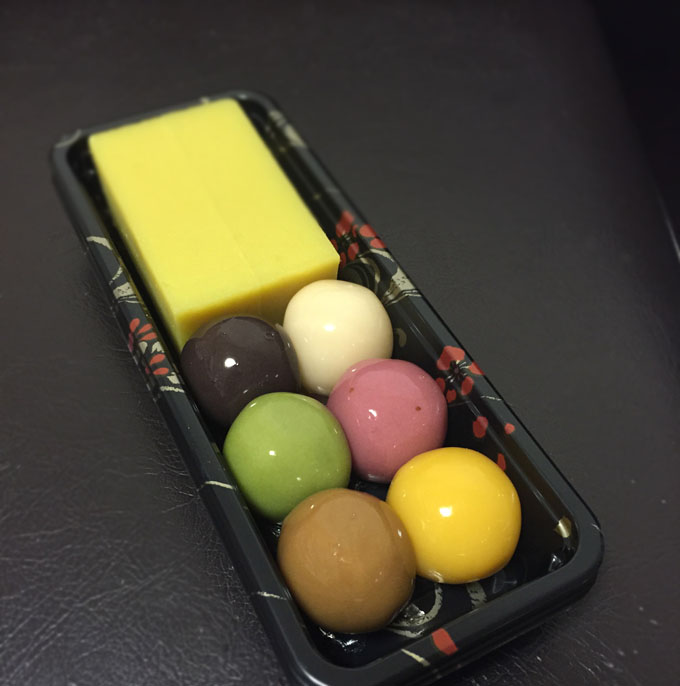 It looks splendid !!
Though these are colorful, but natural.

This sweets are made by koshian.

And then, these are not daifuku.

The rotation of the ball is given with agar thinly.

Because it is not wrapped in glutinous rice, as for it, you can just taste the bean jam straightly.
I ate with bitter Japanese green tea.

My favorite is mikan!
I was surprised at a combination of sweetness of bean jam and acidity of the Japanese citrus.

Potate yokan was delicious too!

This picture is from here.

The potato yokan is made with only a sweet potato, sugar, and salt. You can enjoy natural taste with simplicity of the material itself.

Looks more delicious as it is if I arrange it in this way.

I have eaten in no time this time, but intend to eat with butter on the next time!

Funawa:One of the oldest establishments among wagashi confectioners

麼麼咋咋 is from Malayn Sweets When I travelled to Thailand, I bought...

Issiki Beach is recommended for family in this summer.

It takes 30 minutes by bus from JR Zushi Station. Our family went to...