Thailand and Burmese chaitya are built at the gurney drive of Penang facing each other.

Because I would like to eat something delicious at the Gurney Drive Hawker Center, I came here from GeorgeTown.
This is my 3rd day in Penang Island.

There are Thai and Burmese Buddhist Temples 10 mins on foot from the hotel which I stayed.
Those temples are built facing each other. 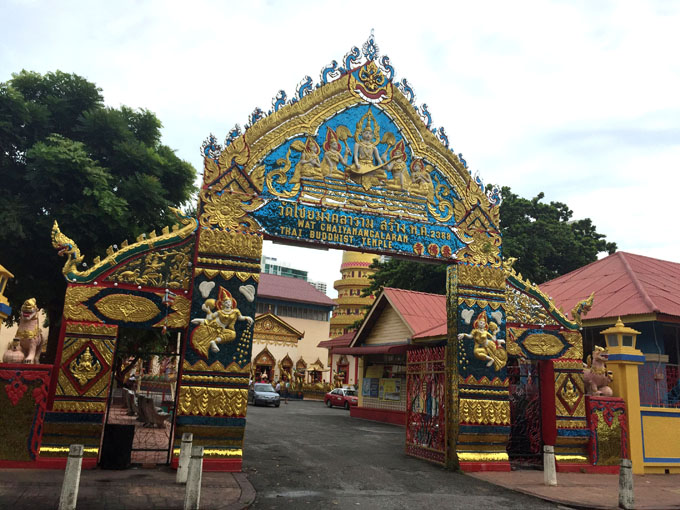 Gorgeous!
Gold, red, and bule colored decorations at the entrance…

The Japanese translation that is full of mistakes

The explanation about the temple was posted at the entrance, I took a photo of it. 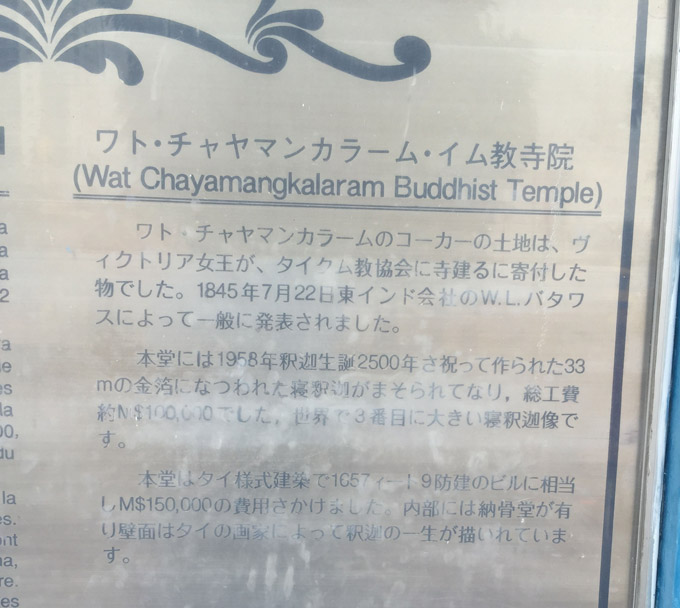 It explained about the original remains.
…which has a lot of mistranslated sentences in Japanese.

When I read this expression,

The translator might be a person who was from Tohoku district.

It is pleasant to imagine it in this way(^^)

Here for the first time i was made aware of…

It is written “Buddhist Temple”

I thought that there is the religion named “IMU religion”, not Buddhism.
Would there be the Japanese person who read proofs this?

A Colorful and Gorgeous Temple

The dragon statues come out at the entrance. 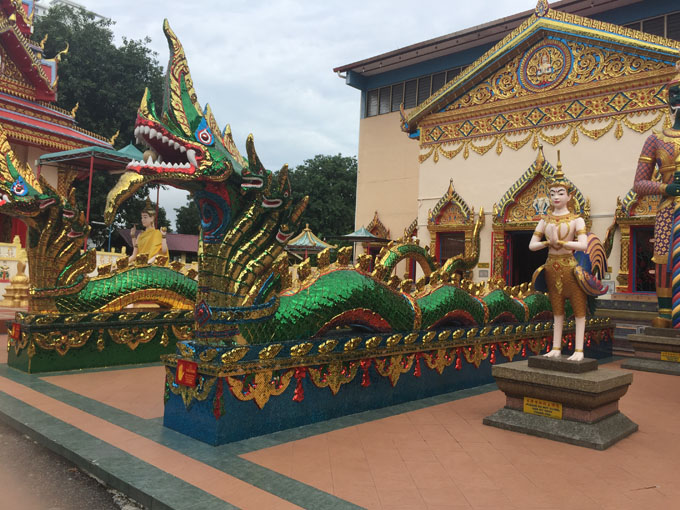 Mandalas are all over the wall. 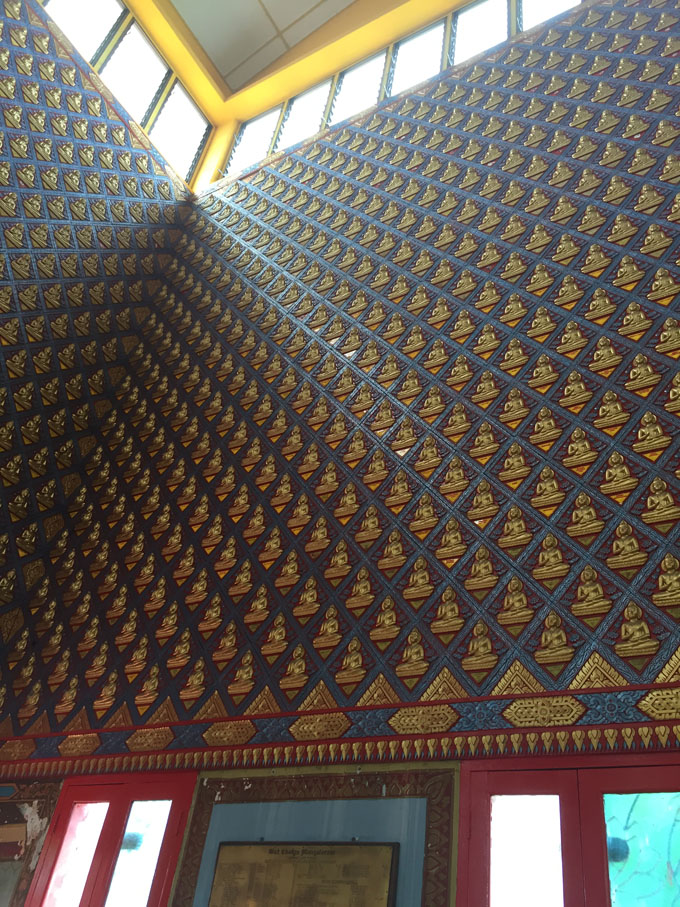 The Buddha is put somewhere casually. 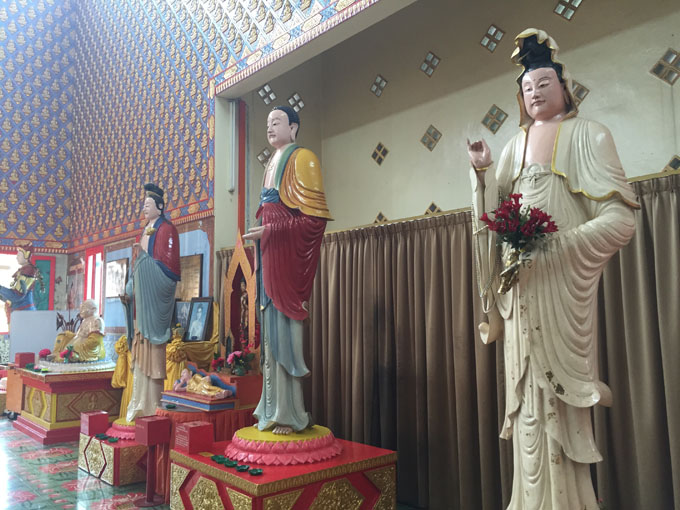 The Lying Buddha, who went to nirvana 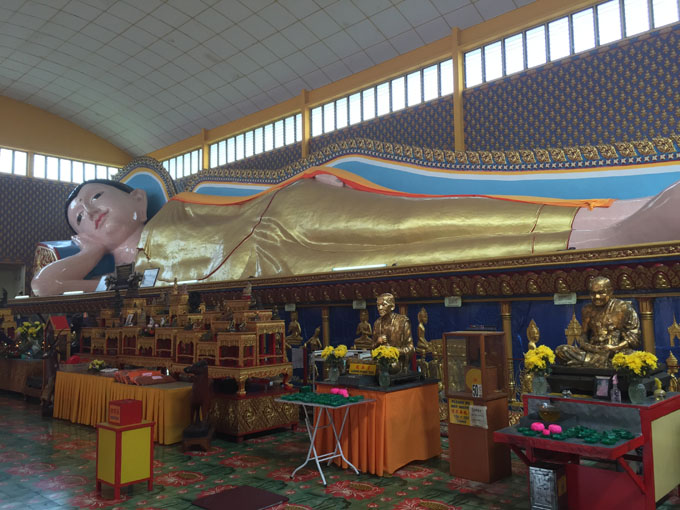 This temple is famous for the lying Buddha.

Speaking of Lying Buddha, though Wat Pho is famous in Thai, this is huge also.
As for the pose, the right hand image on the head and the head faces north basically that seems to come from the west is the typical characteristic of the Lying Buddha.
This became the custom later, let a dead body lie northward.

I remembered what my grandmother said “it is wrong to turn the head to the north when we sleep”, when I stayed at grandparent’s house when I was child.

There are lots of bone pots at the back of the Lying Buddha.
So I did not take pictures to respect the people who were praying.

At last, the floor of the room was full of beautiful lotuses.
Look at this! 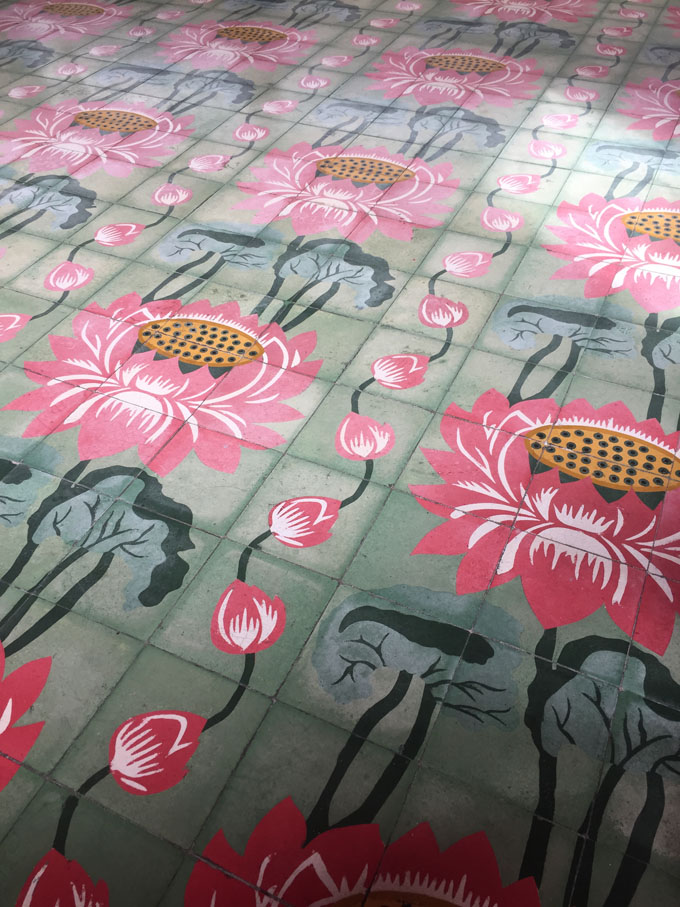 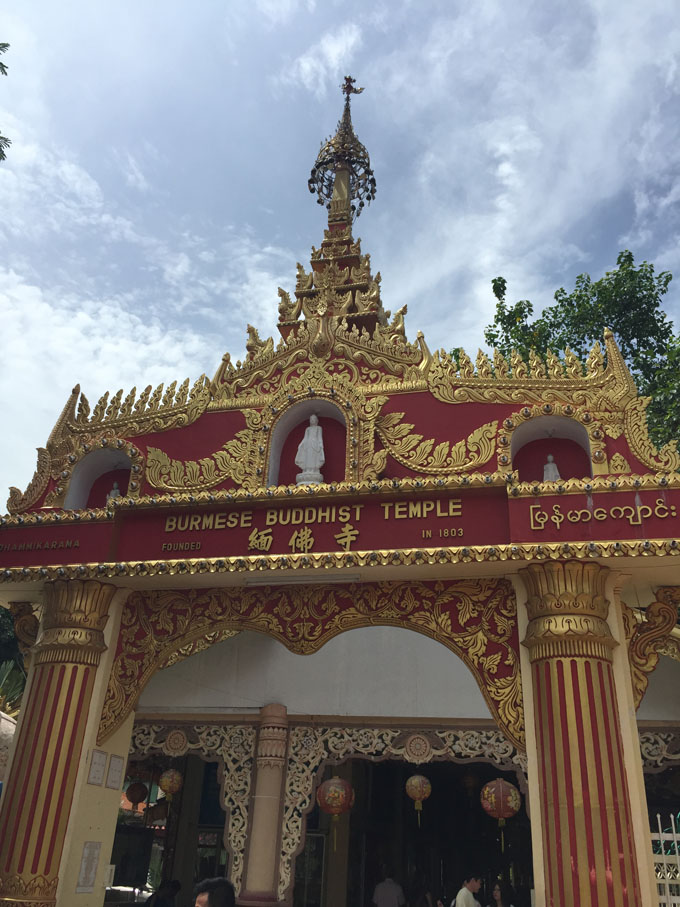 By the way, let’s look at the Burmese temple in the house across the street.
Entrance Fee is free.
This is the only Burmese temple which was built in the late 18th century by a Burmese resident in Penang.
Burma is called Myanmar now.
Here is written the details why there are two names “Burma” “Myanmar”.(Japanese only)

I wrote a graduation thesis about democratization of Myanmar when I was a university student.
Myanmar is one of the countries which I want to visit once by all means someday.

The Myanmar Buddha statue resembles Japanese Buddha in some way 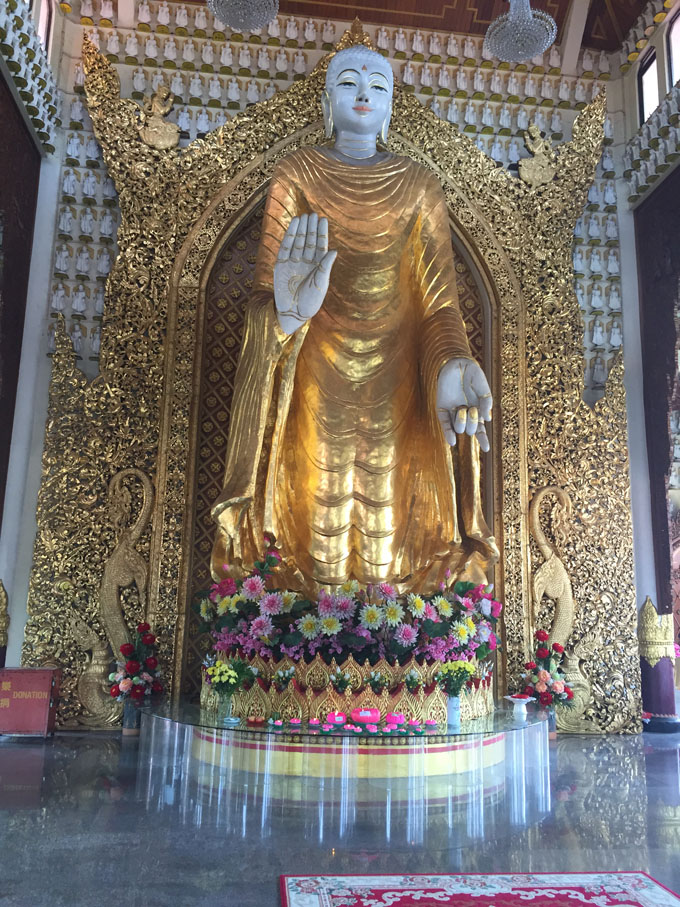 The face of a gorgeous Myanmar Buddha statue giving a gentle smile feels like resembling Japanese Buddha in some way.I was a little relieved looking at that statue. 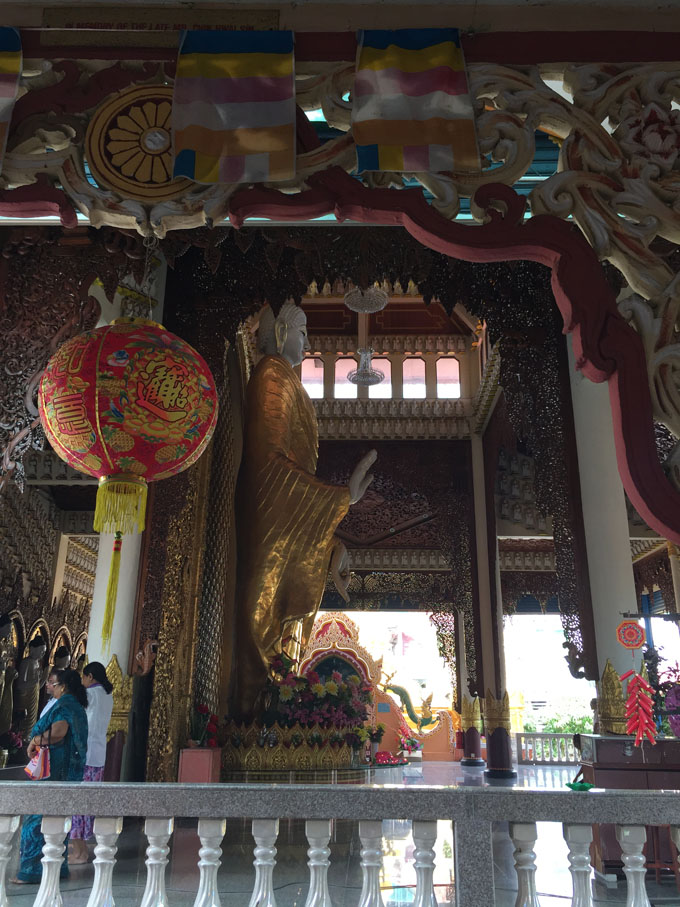 Seeing from the side, I noticed that the palm of the Buddha statue was extremely big. 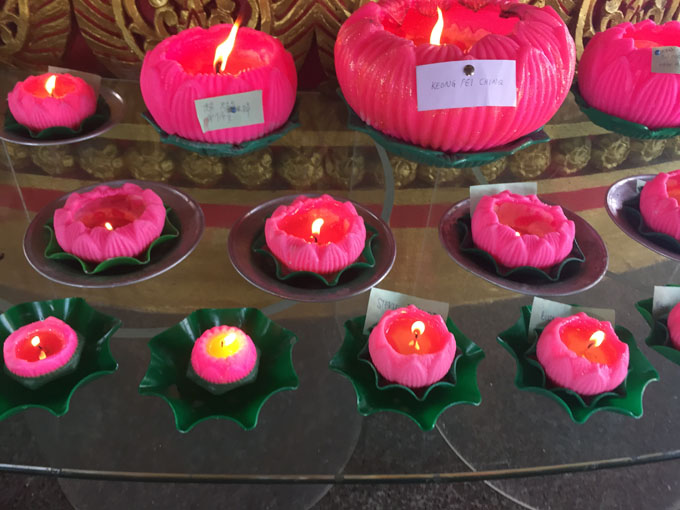 I purchased a candle of the lotus and I sat straight and prayed for a while. 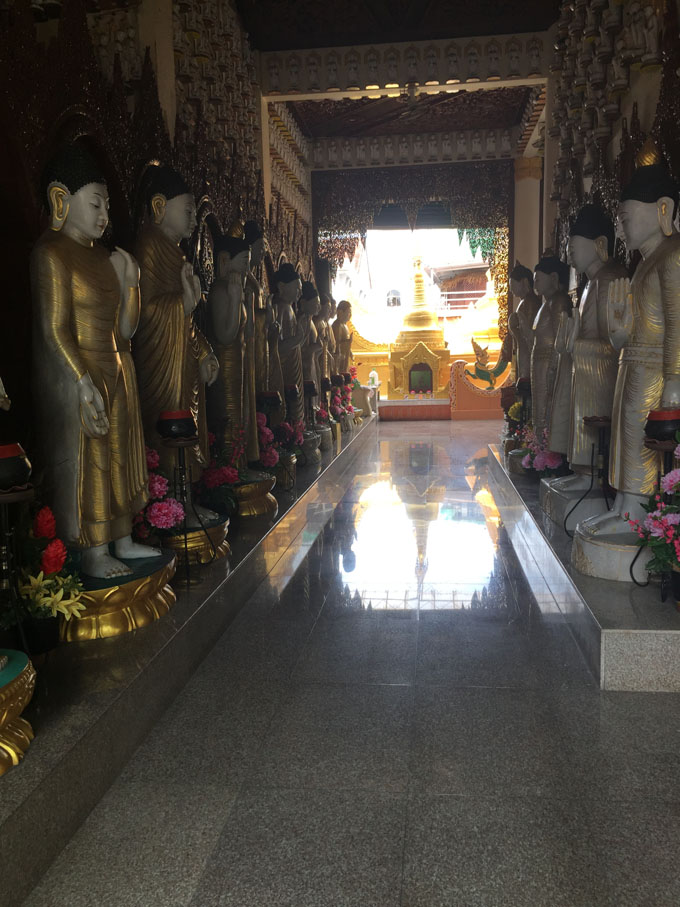 When I went along this passage where Buddha statues were displayed in right and left, I tasted feelings “The God is looking at me”. 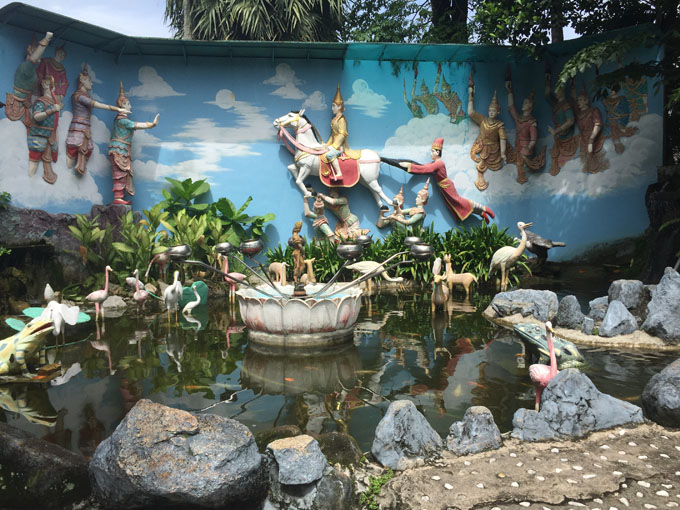 I was surprised at this.There is Buddha in the middle of the pond, and the lotus turns around!
Like an amusement park. I gradually felt good. 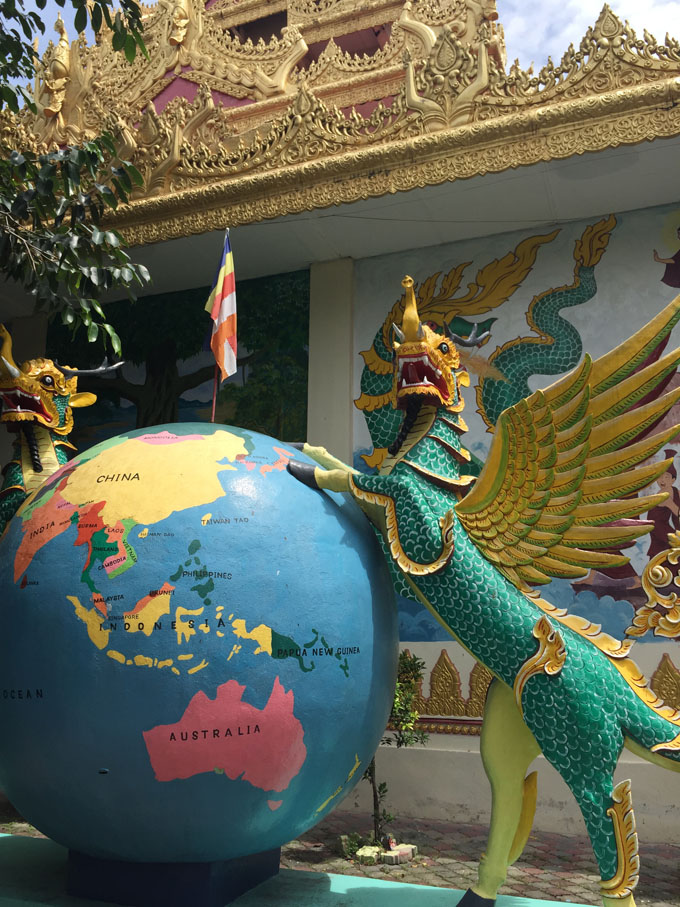 Are these Universal Studios or DisneySea? It is a view of the world to be.
A dragon just puts a hand to Japan. 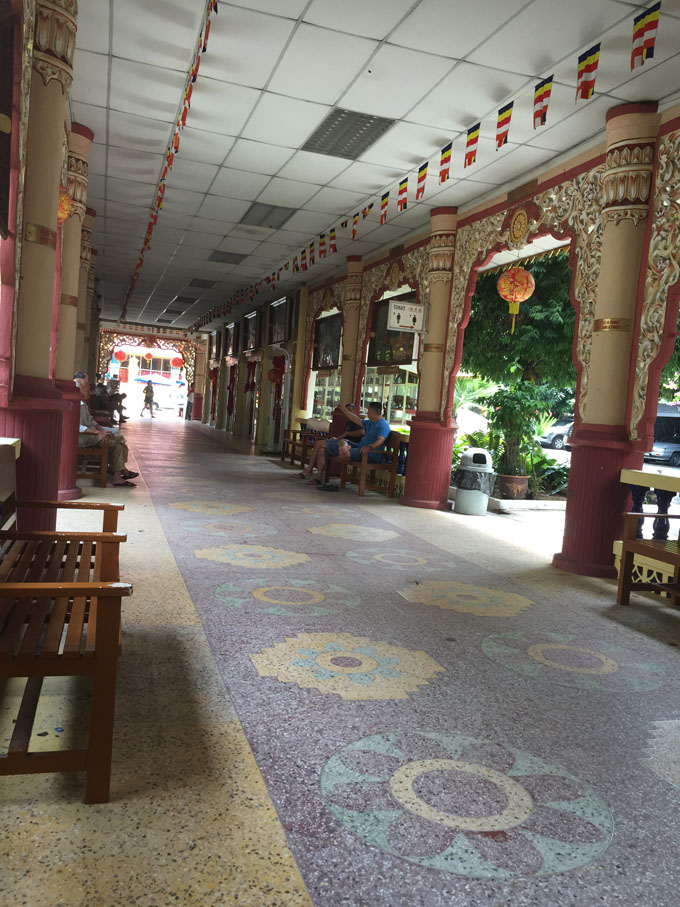 There was something like lodging of the Buddhist priest on the side of this passage.
There were a lot of Buddhist priests who wore an orange shoulder-worn robe. 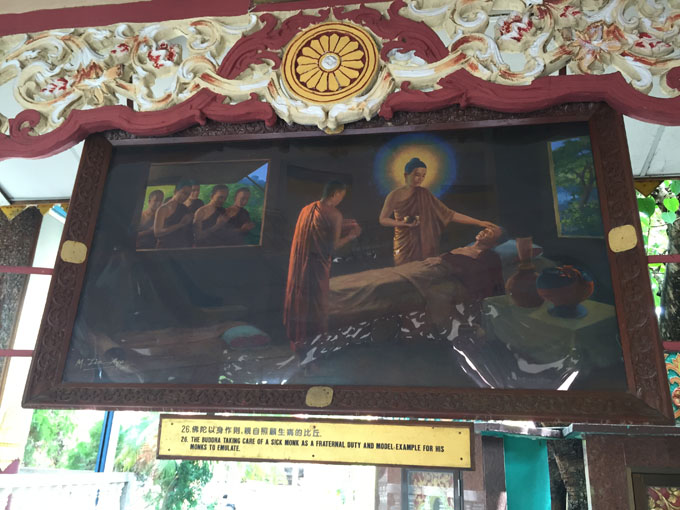 In the passage, the Western-style picture which Buddha was drawn on is displayed, how to describe looks just like a Christian religious painting.

I realized that there are lots of different point, even though the same Buddhism
A Buddha statue was put slightly sloppily, and, in the Thai temple, it has a chaotic impression.There is amiability.
In Thai original culture, I understood the state that received the influence of the Chinese Buddhism, Hinduism well.

The Burmese temple had the impression that was almost Japanese Buddhism a little.
The gorgeous pagoda based on red and gold was powerful.
The way of the expression is totally like the amusement theme park.
In a green garden, there are various buildings and Buddha statues in jam-packed, those are worth watching..

Japanese temples are not so colorful. And there is a solemn, quiet atmosphere.
In contrast, it is somewhat even in a pleasant feeling when I am in the temple of Thailand Burma.

On this trip, I looked at a Chinese temple, a temple of the Hinduism, the Christian church elsewhere.
You can visit many kinds of temples.
Malaysia is a valuable place to visit, I think.
How about thinking about culture, religion, the history of people?

Hinduism temple right by the ChinaTown There was a temple of ...